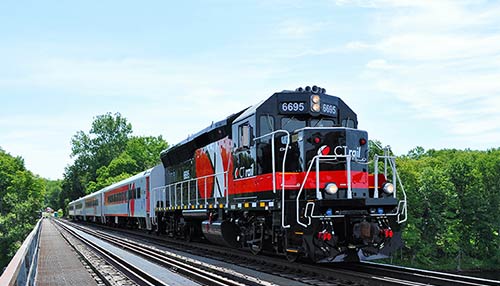 Governor Dannel P. Malloy and Connecticut Department of Transportation Commissioner James P. Redeker announce that the recently launched CTrail Hartford Line saw a total of 69,067 passenger trips during its first six weeks of operation through July 31, 2018 - not including the opening weekend of June 16 and 17 when service was free. “Building a robust, convenient, and practical transportation system is critical to growing our economy and attracting business, and the Hartford Line is a key component of these efforts,” Governor Malloy said.

The average weekday ridership on the Hartford Line is now at 1,860 riders, just 85 short of the first-year goal of 1,945 passenger trips per day. This puts Hartford Line on track to exceed the first year ridership goal well before June 2019, the end of the first full year of train service. “We’ve already seen an explosion of interest in transit-oriented development in rail communities and we expect that will only grow as young people continue to make clear that they want transit at the heart of their hometowns,” Commissioner Redeker said. Ridership data for the month of August 2018 will be available in early October.